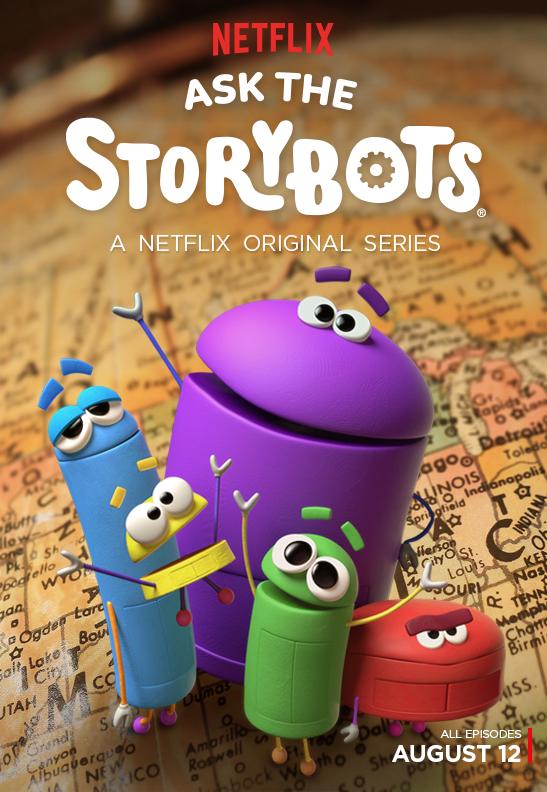 Ask the StoryBots is an American live action/animated children’s television series based on the characters from the StoryBots educational website and videos. It premiered exclusively on Netflix on August 12, 2016. Originally created and produced by JibJab Bros. Studios, the StoryBots media franchise was fully acquired by Netflix in May 2019.

In its first season, the series was nominated for an Annie Awards, was a finalist for a Peabody Award, was nominated in the International category at the British Academy Children’s Awards and received six nominations for the Daytime Emmy Awards, including Outstanding Preschool Children’s Animated Program. It won the 2017 Daytime Emmy Award for Outstanding Interactive Media – Enhancement to a Daytime Program or Series. Its second season, which premiered on Netflix on August 24, 2018, received the Annie Award for Best Animated Television Production for Preschool Children and won two Daytime Emmy Awards for writing and directing.

Ask the StoryBots also inspired a holiday special, A StoryBots Christmas, also on Netflix, which won two Daytime Emmy Awards. Starting in its second season, Ask the StoryBots has been translated into 22 languages and is available for streaming on Netflix in 190 countries.

A third season premiered on August 2, 2019. A trailer for the new episodes was launched on YouTube ahead of the season’s premiere.

The StoryBots are curious little creatures who live in the world beneath our screens. In each episode, the intrepid quintet of Beep, Bing, Bang, Boop and Bo of Team 341B go on an adventure to the human world to help answer kids’ biggest questions, like “Why is the sky blue?” or “Why do I need to brush my teeth?” They deliver their answer at the end of each episode in the form of a musical video.